The After Tarot Kit: An honest review for tarot beginners - The Simple Tarot Skip to content
This post contains affiliate links. Read my disclosure policy here. 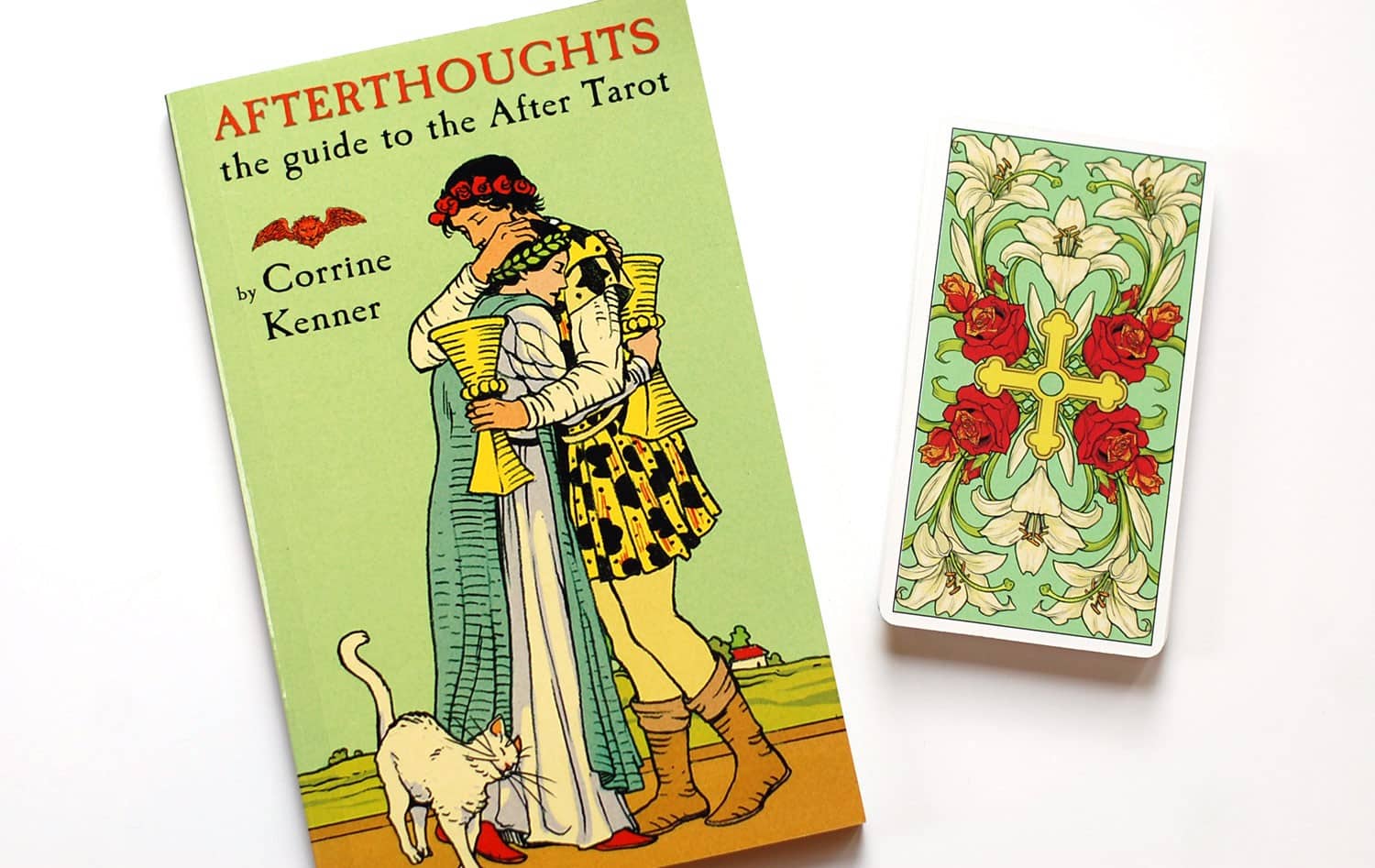 When I first saw this tarot deck, I just knew I had to get it. It shows the exact scene from the original Rider-Waite tarot cards, only one moment after. These cards continue the story and add to it, too.

In a way, this is a bit of a novelty deck, although it’s extremely easy to read. But I also find it useful for tarot study to help understand the stories and meanings of each card to see “what happens next.”

I purchased my copy of the After Tarot Kit in the summer of 2017 from Amazon for about $25.

THE AFTER TAROT DECK REVIEW

It’s a fun tarot deck for people who are already familiar with the Rider-Waite tarot card meanings.

The After Tarot Kit is an extremely high-quality deck and package. It makes a wonderful gift for anyone who loves tarot and storytelling.

HISTORY OF THE AFTER TAROT KIT

The deck was created by Corrine Kenner and illustrated by Giulia Francesca Massaglia and Pietro Alligo. This deck was was first published in early 2017 by Lo Scarabeo, an Italian tarot deck publisher.

Corrine Kenner is also the author of the companion guide. She’s written many books about tarot, including Tarot for Writers, Tarot and Astrology, and The Wizard’s Tarot .

Giulia Francesca Massaglia is an Italian illustrator and cartoonist. She also illustrated the Mucha Tarot and the Romantic Tarot for Lo Scarabeo. I couldn’t find a portfolio or website online, but she’s on Facebook (in Italian).

Pietro Alligo is also an Italian illustrator, and he’s responsible for the Tarot of the Renaissance as well as others for Lo Scarabeo. My Italian is non-existent, so I wasn’t able to find much about him online.

The After Tarot Kit is a high-quality deck and package – much higher quality than normal. The exterior box opens from the side with a magnetic flap. Inside the box is the companion guide with the deck of cards nestled beneath it.

The cardstock is thick and sturdy with just enough “slip” to make shuffling the cards easy. These are very firm cards and they will take quite a bit of abuse.

The backside of each card shows a beautiful illustration of white lilies and red roses on a light green background. I like the card backs a million times better that the original RW-deck.

The companion book is also quite impressive. It’s printed in full color throughout and is organized in an unusual way. I’ll share more details below… 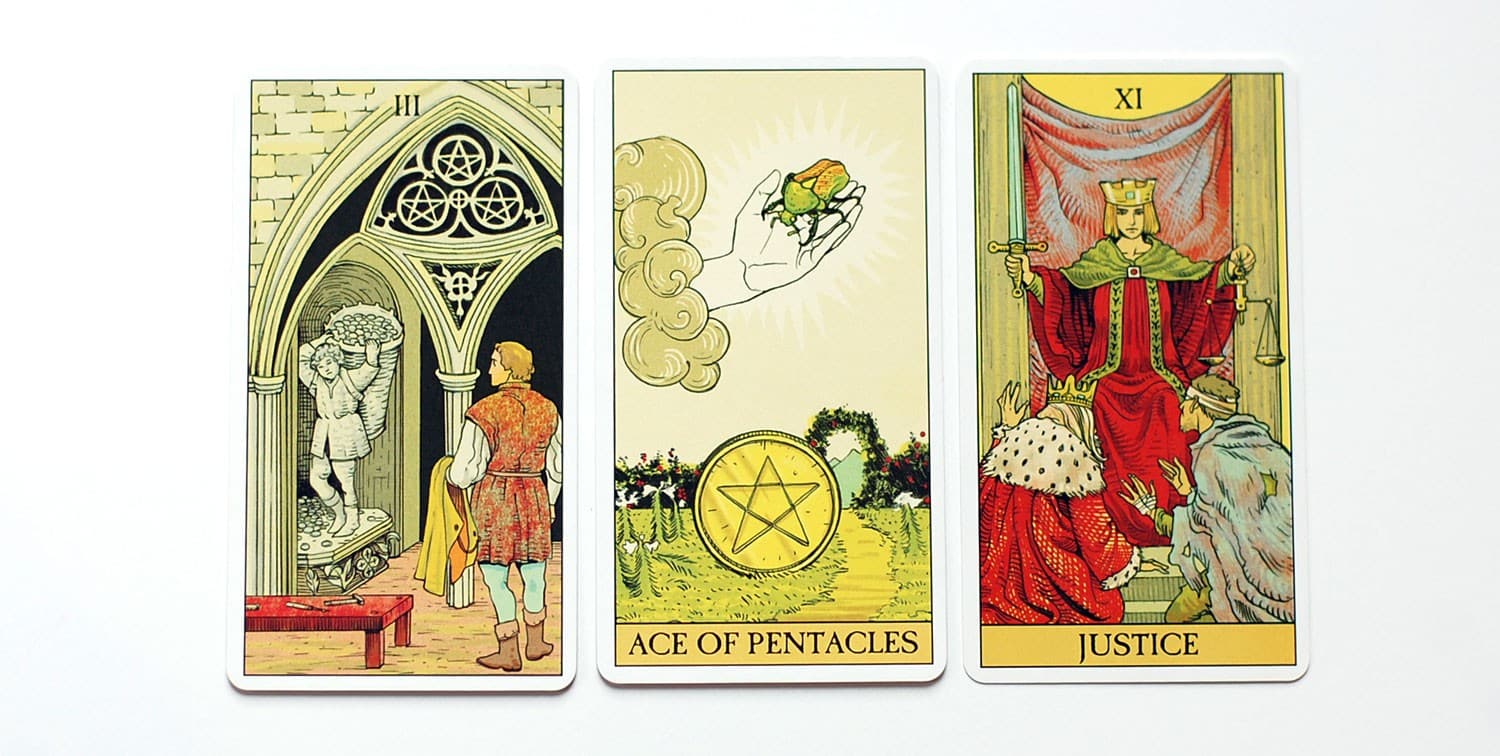 READING TAROT WITH THE AFTER TAROT DECK

The After Tarot Kit is designed to show what happens in the cards, one moment after what is shown on the original Rider-Waite deck.

Each card is extremely similar to the original RW card. If you know how to read any RW-based deck, this one will be very easy to read. Most of the differences are subtle and you’ll have to study each card to see how they show the “one moment after” image.

The After Tarot Kit carries the story of each of the cards just a little bit farther. It’s like you’re eavesdropping or being a peeping tom (but not in a creepy way). For example, the Two of Cups shows the couple embracing, and the Eight of Pentacles shows the craftsman showing off his completed work. If you like stories or storytelling, this is a fun deck to play with.

USING THE AFTER TAROT COMPANION BOOK

The companion guide is divided into two sections. The first outlines the basics of tarot and the second gives detailed descriptions of each of the cards.

This second section is organized strangely, but it works. The cards are organized by numbers, with the Major Arcana together with the pips. For example, the Justice card (11 = 1 + 1 = 2) is in the section with the Twos of each suit.

Each card is shown with a short intro paragraph and then covered in detail with the card description, key symbols, and suggested interpretations. When it comes to describing each card and its meanings, this is one of the most comprehensive companion books I’ve seen.

The After Tarot Kit doesn’t include any information for reading reversed tarot cards, however. The companion book doesn’t even include keywords for the reversed meanings.

IS THE AFTER TAROT KIT GOOD FOR BEGINNERS?

Yes, I’d recommend this deck over the original Rider-Waite, in fact. The images are so close to each other, but the quality of this deck is much better.

It’s very easy to read these cards and it is an excellent choice if you’re looking for your first tarot deck.

PROS OF THE AFTER TAROT DECK

CONS OF THE AFTER TAROT DECK

Overall, I give this deck 5 full stars. The quality is gorgeous and I love the idea of it.

If you’re a total tarot beginner looking for your first deck, this is a good choice. It’s a better quality deck than the original Rider-Waite (which uses cheaper cardstock, has ugly card backs, and doesn’t even come with a companion book).

If you do like the original deck, though, you’ll love this one. It’s witty, fun, and very playful. It’s like meeting up with an old friend from way back when, and finding out you can still talk and laugh together like no time has passed at all.

If you want your own copy, you can purchase the After Tarot Kit through Amazon for about $25. It’s also available (in the U.S.) through Llewellyn Worldwide for a few dollars more.

BLACK FRIDAY SALE: Get 50% off The Simple Tarot Deck! Dismiss