If you go to a professional tarot reader to have your cards read about a specific question, it’s likely they will use this spread. It’s a classic, and it has deep history.

Tarot readers can get quite passionate about this spread, too. Everyone has their own way of laying out and interpreting the cards, and people can get quite opinionated about “the right way.”

The Celtic Cross Spread is best used when you have a single, specific question that needs clarification. It can also be used for general information, but that can be more difficult for tarot beginners to start with.

I suggest writing down your question before shuffling your cards, so you know exactly what you asked them. That way, as you go through the reading, you’ll be able to catch those subtle jokes the Universe likes to play. (Those “be careful what you ask for” ones!)

If you choose not to ask a single and specific question, you can still use this spread. It will give you a general reading about your present situation, and the cards (and your subconscious) will tell you what is important for you to investigate at this point in your life.

There are so many possibilities with this spread, and you’ll probably find dozens of different interpretations online. This flexibility is one of the reasons it is so popular. All versions and interpretations are acceptable! You can even make up your own.

However, to get an accurate and useful reading, you need to clearly communicate your intentions to the cards. They’ll only give back as much as you put in.

A special note about reversed cards: You don’t have to read them reversed if you don’t want to! Just tell the cards as you shuffle that you will (or won’t) be reading the cards reversed. It’s that simple.

The Basics of the Celtic Cross Tarot Spread

The Celtic Cross spread is best used when you have a single, specific question to ask. It’s not as useful when you are looking for general information (I like to use the Zodiac Tarot Spread for that).

The Celtic Cross spread deals with all aspects of one issue, one at a time.

Most variations of this spread switch up cards three and five, and sometimes cards four and six. There are also variations in how you interpret cards seven, eight, and nine.

You’ll hear talk about a significtor card (or signifier), which comes from Arthur Edward Waite’s instructions on how to read this spread. The significator, which is totally optional, is a card that represents the querent. You pull it from the deck before the reading.

I never use a significator – to me, using one seems silly since there are already cards that represent the querent in the spread. Not only that, but by pulling one card out of the deck, you have one less card in the deck that the reading might have needed. It just doesn’t make sense to me.

Shuffle and cut your deck as you normally would. The cards can either be laid face-up, or they can be laid face-down and flipped as they are being read.

To begin, lay one card in the center of the table, slightly to your left. The second card is laid on top of the first, but at 90 degrees (or crossing it).

The third, fourth, fifth, and sixth cards are laid around this first pair. There are different ways to lay out these cards, so you just need to try out a few variations to see what fits you best.

Common placements for these cards include:

My favored layout is to place the third card at the bottom, and the remaining cards clockwise around the pair. This is how I’ll be interpreting the layout below.

(If you’d like to try a different order of laying these cards, just make that intention to your cards as you shuffle them).

The seventh, eighth, ninth, and tenth cards are placed in a vertical column, to the right of the cross. The seventh card is placed first, closest to you, and the tenth is placed last, at the top of the column.

Since this is one of the most common tarot card spreads, and it’s been in use for a very long time, there are many variations. I’ve included my favorite layout and interpretation for this spread, but I suggest you use this just as a starting point. (There are some more resources at the end of this post).

For this reading, I’m going to read the reversed cards. Remember, you can always choose whether or not you want to read the cards reversed or not. Just let the cards know ahead of time what you’ll be doing.

If you want some tips on reading reversed cards, look here.

The First Card – The Querent

This card indicates the ‘person in question.’ This usually means the person asking the question, but in some readings it may mean someone in the querent’s life.

This gets tricky, especially when your querent is asking a question like, “How will my father’s surgery affect our family?” when there is an obvious second party involved. The best way is just to ask for feedback and clarity as you go through your reading.

Other interpretations for the first card

The Second Card – The Situation

This card will often show that there are possibilities for a solution (if it is positive) or that there are obstacles in the way (if it is negative). Challenges usually show up in this position.

Since this card ‘crosses’ the first card, you can think of it as the problem that is crossing the querent, or standing as an obstacle in their situation.

Other interpretations for the second card

(The card in the second ‘crossing’ position is always read upright, not reversed).

The Third Card – The Foundation

This card reveals influences on the querent, usually from the distant past. This card will show the long-term choices or patterns that have brought the querent to the present situation.

These are things that still effect you today, even though they happened long ago. This card can indicate negative things you need to move on from, or positive things you can draw on for support.

The Fourth Card – The Recent Past

This card indicates influences that are more recent, and have lead to this situation, or to the querent asking this question today.

Sometimes this card is related to the third card, but it doesn’t have to be.

This card reveals the short-term outlook for this problem or situation, generally over the next few months. It’s often called ‘the crown’ card, since it’s at the top of the cross.

If things progress along their present course, this card will show the events that are likely to take place in the future.

The Sixth Card – Immediate Future of the Situation

The events shown here will happen soon, and there is little that the querent can do to change them.

This card shows if this situation is on hold, or if it is on its way to a resolution. Whereas the second card shows whether or not there is a solution to this situation, the sixth card shows how far along the problem is to being solved.

This is a good card to compare with the first card (the querent card in the center of the cross) to see if there are any obvious conflicts.

For example, if the querent seems to want one thing (reconcile with her husband) but actually, secretly wants something else (a fling with a coworker), then the subconscious motivations will show up here.

Other interpretations for the seventh card

The Eighth Card – Outside Influences

This card indicates what the querent’s friends and family feel about their situation. It may show that other people are in control, or that there are people who need to be consulted with the decision making.

Other interpretations for the eighth card

(FYI: The meanings for the seventh and eighth cards are commonly switched, so be sure you know how you’ll be reading them before you question the cards).

This card can be closely related to what is hidden in the eighth card. The ninth card reveals what the querent hopes and/or fears about the situation.

In the example above, your querent may hope (and fear!) that the coworker wants a real relationship, instead of just a fling.

This can sometimes be a difficult card to interpret. It helps to compare it to card three, which is the foundation card. There might be a relationship between what they hope or fear and what has led them to this point.

If this card is reversed, it may be that the querent is not yet aware of how their hopes and fears are driving the situation forward.

Other interpretations for the ninth card

The Tenth Card – The Final Outcome

This card shows the likely long-term outcome of this situation, if things stay on their present course. This card often shows what happens when you put all nine of the other cards together.

Timeline-wise, I usually interpret this as a solution that occurs over the course of several months to a year.

If there is a court card in this position, I always grit my teeth a bit. It can mean that the ultimate outcome is in the hands of the person who is represented on the card.

When you are reading for someone else, there is a natural human tendency to make the outcome seem positive and hopeful, even if the cards skew negative. Remember that your role as a tarot reader is to interpret what you see, not to sugarcoat the bad news just to make someone happy.

Putting it all together

Reading a tarot spread is like telling a story. There is a beginner, a middle, and an end. It’s your job to find the thread that runs through it all, and bring it together in a way that is positive, actionable, and helpful.

And if you’re looking to expand on your tarot knowledge, check out the Tarot Card Mastery program, which covers reading multiple-card tarot spreads in more detail. 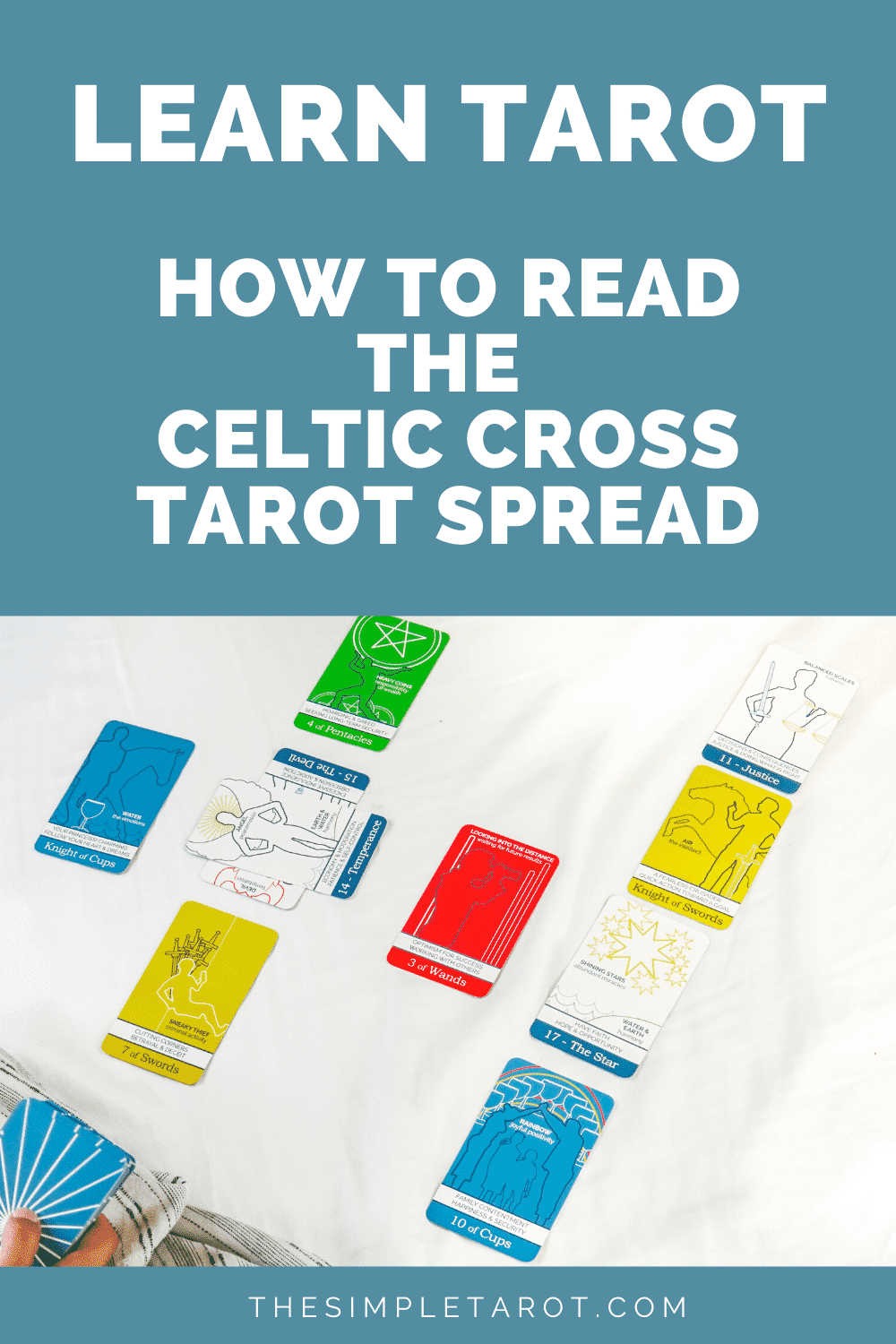 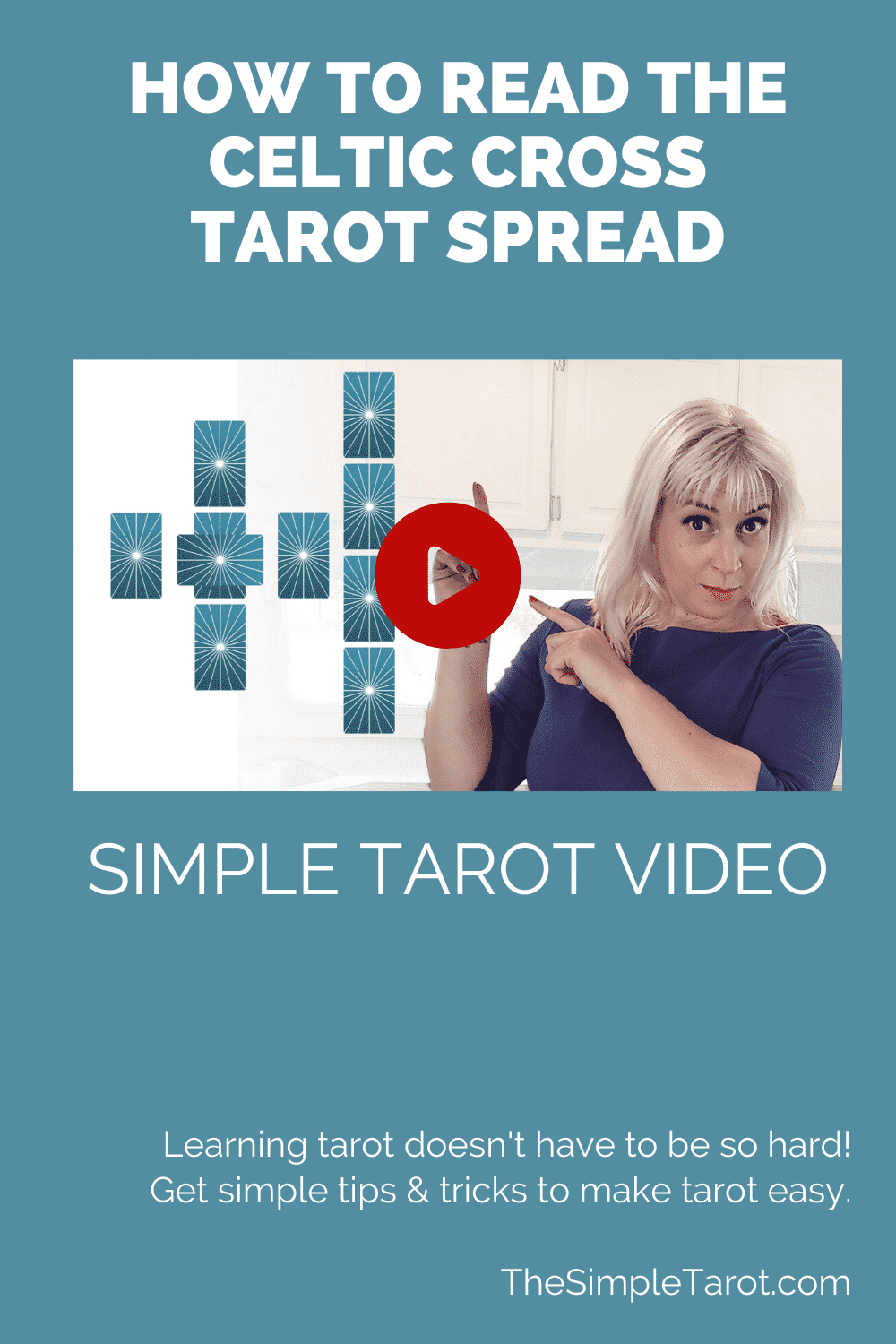 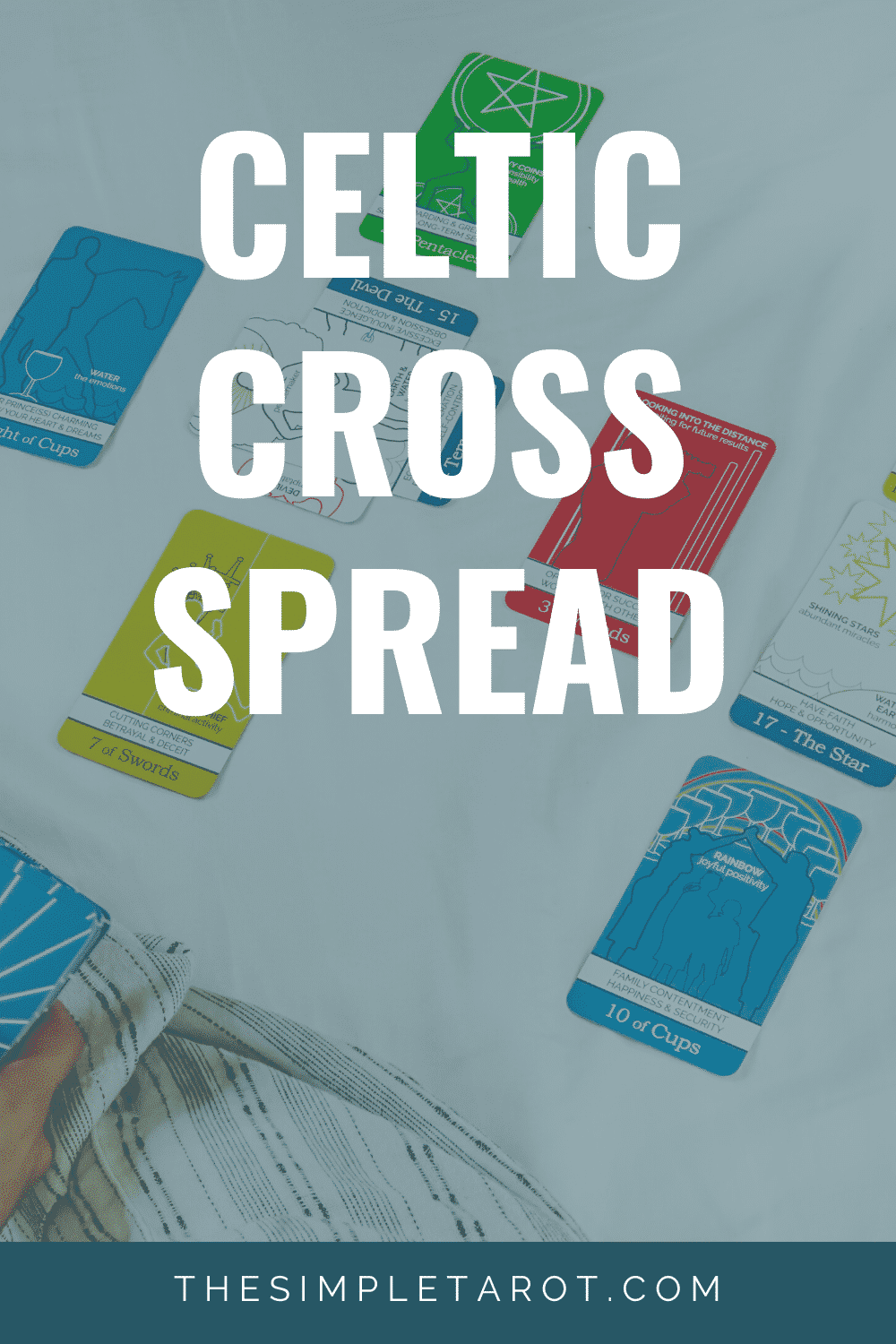 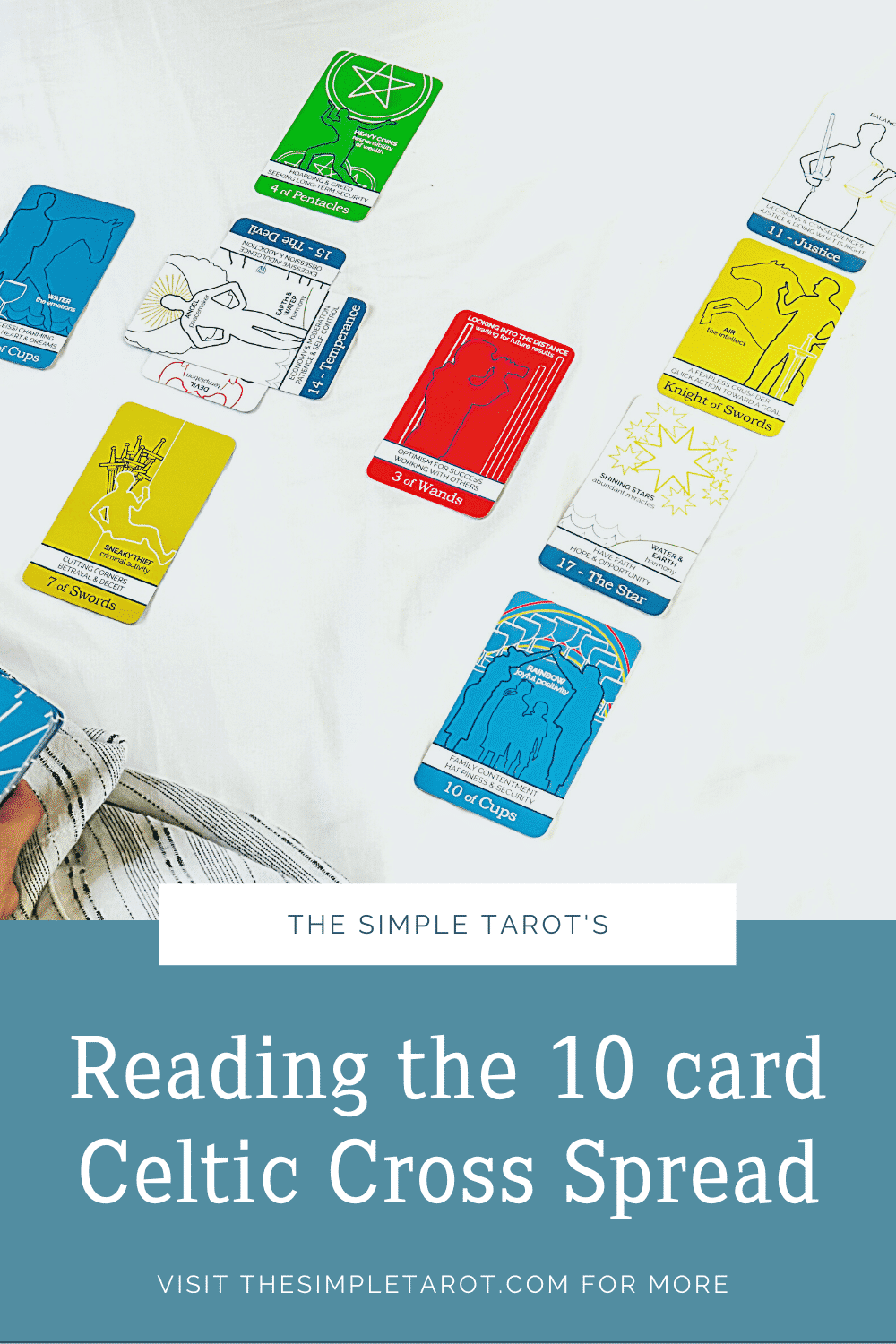