There are two ways to approach the tarot hero’s journey. The first is your personal journey of learning, using, and understanding the tarot as you live the rest of your life. This is a life-long journey.

The second tarot journey is presented in this post and video. In this journey, The Fool (the first card of the tarot deck) becomes the hero of his or her own life by taking a path that travels through each of the 22 Major Arcana cards.

This becomes the story of The Fool’s Hero’s Journey (as presented by Joseph Campbell in The Hero With A Thousand Faces). The Hero’s Journey is a storytelling structure used by writers and artists as a way to understand the common archetypes and problems of life.

The Hero’s Journey is a classic storytelling structure dating back thousands of years.

The Hero – or Heroine – has a problem they must solve, but the only way to solve it is to go on a quest of self-discovery. They will have many problems and meet many people who stand in their way, and they must dig deep within themselves to accept and implement the changes needed to succeed.

In the tarot, there are many ways to interpret the Hero’s Journey. In this video, I’ll be using The Fool card to travel through the rest of the Major Arcana, meeting archetypes and obstacles along the way.

In the Hero’s Journey, there are 12 steps or phases that the hero must complete, and in most stories they happen in this order:

One: The Ordinary World

The hero is oblivious of the adventures to come. His everyday life is problem-free. In a story, this is where we get to know the personality of the hero and we see their flaws and weaknesses play out in their ordinary, every day life.

In our tarot journey, the Ordinary World is represented by The Fool card, the first card in the Major Arcana. 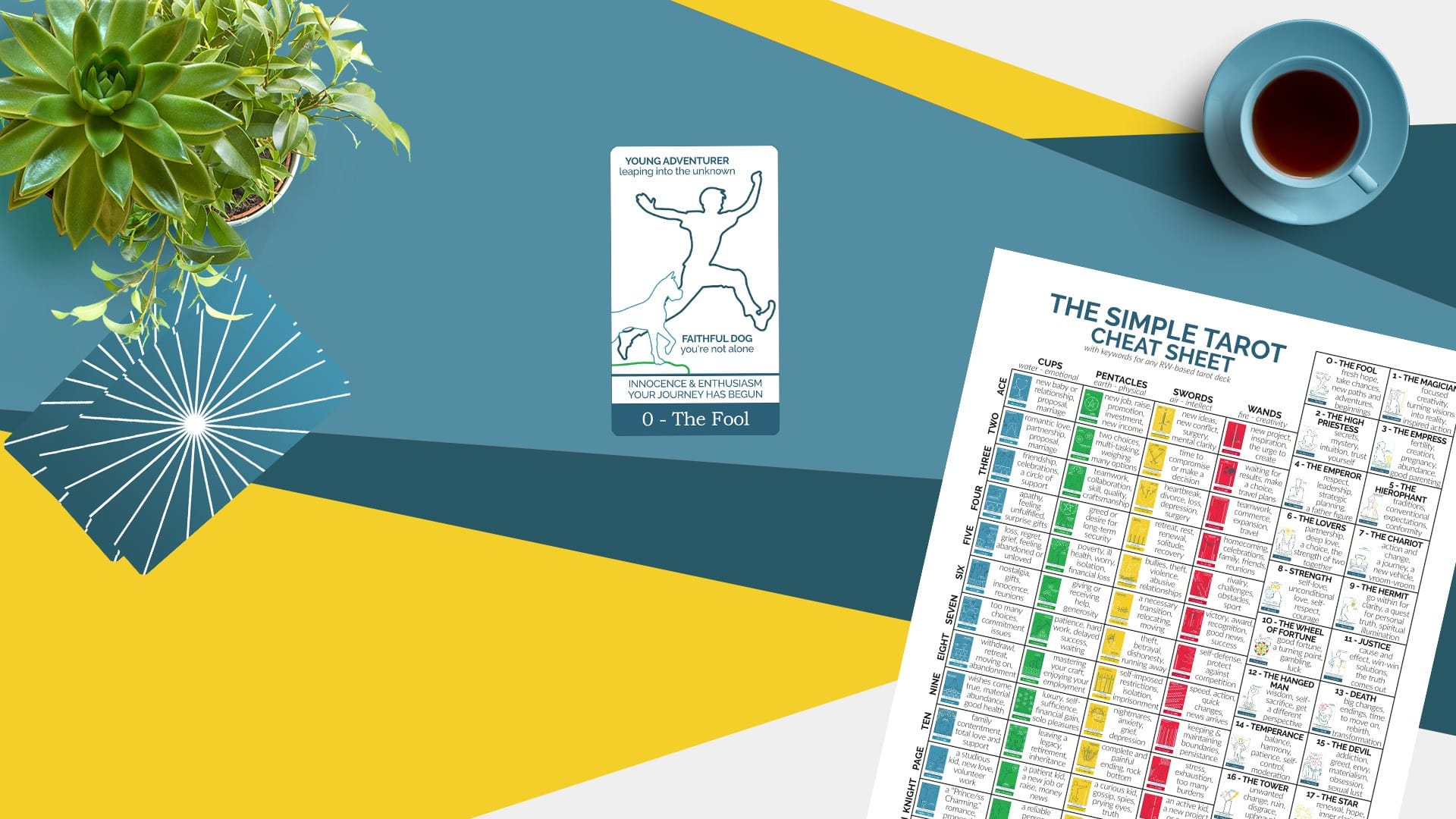 Two: The Call to Adventure

Something happens to shake up the hero’s world. It may be big or small, but it disrupts the hero’s comfort and he or she must face the challenge to find a solution.

The Call to Adventure is represented by The Magician card, the second card in the Major Arcana.

Three: The Refusal of the Call

Most often, the hero will outright refuse to fix the problem, or will have doubts about his ability to do so.

His comfortable couch seems much more appealing than the unknown and perilous road ahead.

In a story, the Refusal of the Call is optional. There are no cards in the Major Arcana that perfectly match the refusal.

The hero needs someone (or something) to spur him into action and point him in a direction. This guidance usually comes in the form of a mentor who gives the hero strength and courage.

In our tarot journey, the mentor figure will be one of the next five cards – The High Priestess, The Empress, The Emperor, The Hierophant or The Lovers.

They each have unique wisdom and experience, and depending on the hero’s problem, will have the advice he or she needs. 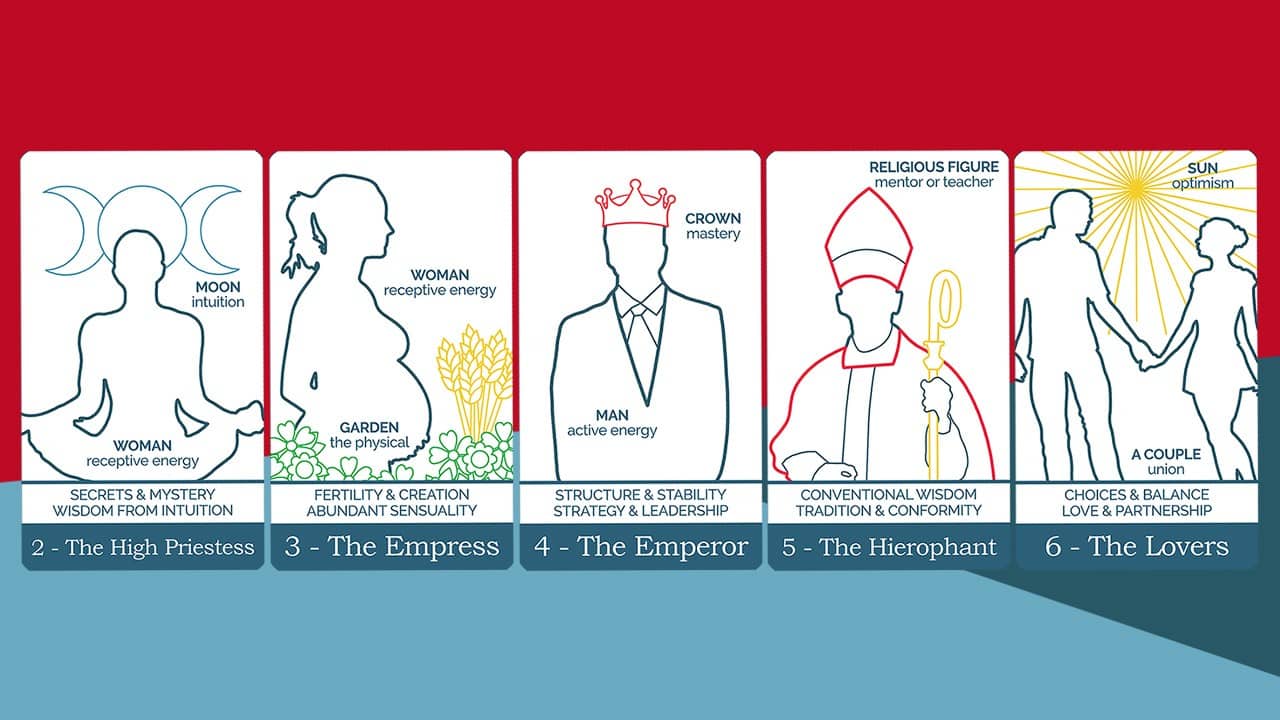 Five: Crossing the Threshold (into the new world)

The hero is ready to begin the journey. At this point in the story, our hero will leave his or her comfortable and familiar life and Cross the Threshold into a new world. In most stories, this is a literal change of location.

He is committed and once the journey starts, there is no going back. In the journey through the tarot, this is represented by The Chariot card.

Things never go easy for our hero. Now that he has committed to his quest, there will be a series of increasingly difficult challenges to test him. This will be a combination of obstacles in his path, bad choices or mistakes, and people who try to stop him.

He will earn friends who help prepare him for the greater ordeals yet to come.

He will come across enemies who will do everything they can to stop him.

He will succeed and fail during these challenges, growing stronger through each one.

In the tarot, these Tests, Allies, and Enemies are represented by the next four cards – the Strength card, The Hermit, The Wheel of Fortune, and the Justice card. 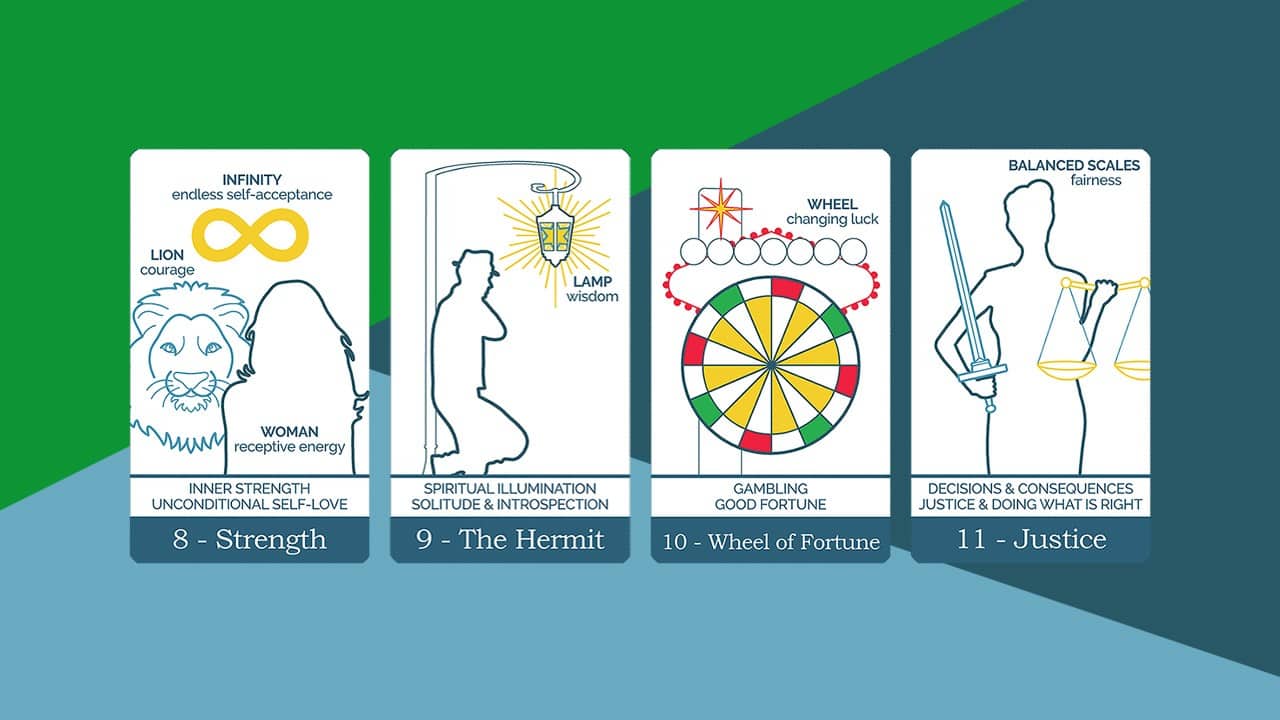 Seven: Approach to the Inmost Cave

The hero must dig deep before confronting his deepest fears and problems. In a story, the Inmost Cave may be a scary place, person, or conflict that the hero must face.

Despite his prior lessons and successes, the hero again doubts his abilities. Unlike before, he doesn’t need to be pushed by a mentor to face his fears – he’ll do it himself.

Ultimately, in the cave, the hero accepts that he or she is flawed and likely fail, but must still continue the journey.

In the tarot, the Approach to the Inmost Cave is represented by The Hanged Man.

The hero will face a dangerous physical test or a serious inner crisis in order to survive. He will encounter his deepest fears, and must use all of his (previously gained) skills and experiences to win the day.

This is the point where the hero puts everything on the line. He will succeed, or die trying. There is often a Crisis here, where the hero is forced to make an impossible choice.

A good hero will choose the option that puts himself at risk to save or support others. He has accepted his flaw, and grown past it, basically “dying and being reborn again.”

A not-so-great hero will choose the option that puts his needs and desires first, keeping him stuck. It’s a “death of the spirit” moment. Technically, this isn’t hero behavior, but some protagonists never learn or grow, and many of the story points of the non-hero’s-journey are the same as the real Hero’s Journey.

In our tarot journey, the Ordeal is represented by The Death card, and this can often be the MidPoint of the story.

Nine: The Reward, or Seizing the Sword

Of course the hero wins! He is the hero, after all.

After successfully facing the Ordeal, the hero is transformed into something greater, stronger, and better than he was before.

In a story, the Reward is usually represented by a physical object, a secret, or reconnecting with something (or someone) lost.

Even though it seems like the hero has completed his quest, it is really only half over.

He still needs to bring his lessons back to the Ordinary World.

In the tarot, this is represented by the Temperance tarot card.

Ten: The Road Back

The hero starts to return home, yet his journey is not over. There will be temptations and setbacks, and the hero must choose between his own personal desires and those of a higher purpose.

Just because our hero made one good choice, doesn’t mean he’ll continue to make good choices. There are many temptations on the road home.

In the tarot journey, this is represented by The Devil.

This is the final climax of the story where the hero will face his most dangerous encounter yet.

The final battle will impact more than just the hero – it has greater consequences for his friends, family, community, and the world beyond.

If our hero has been making good choices, this will be an impossible fight where he uses the lessons he’s learned on this journey to summon one last bit of courage and cleverness.

If our not-really-a hero protagonist has been making bad choices, this is where things all go to shit.

This is represented by The Tower in our tarot journey.

Twelve: Return with the Elixir

The hero will return home to his Ordinary World to start a new life. He is a changed man.

In classic stories, the hero will receive a literal or symbolic reward (the Elixir). His friends will share in his success and his enemies will suffer.

In our tarot journey, this is represented by the three card series of The Star, The Moon, and The Sun, followed by the Judgment card and The World.

Of course, a hero’s job is never done! Once he learns one lesson, solves one problem, or conquers one fear, there will always be more.

The hero begin The Hero’s Journey again and again throughout his life in a never-ending cycle. (This is one reason that movie sequels and multi-book series are so popular and fun to write)!

In the tarot, this return of the cycle is represented by The Fool card again.

Wrapping it all up

So, that’s the Hero’s Journey, as it relates to the Major Arcana of the tarot. What do you think?

I’d love to hear from you, so join us in our private Facebook Group and share how YOU use the tarot cards in your writing life. 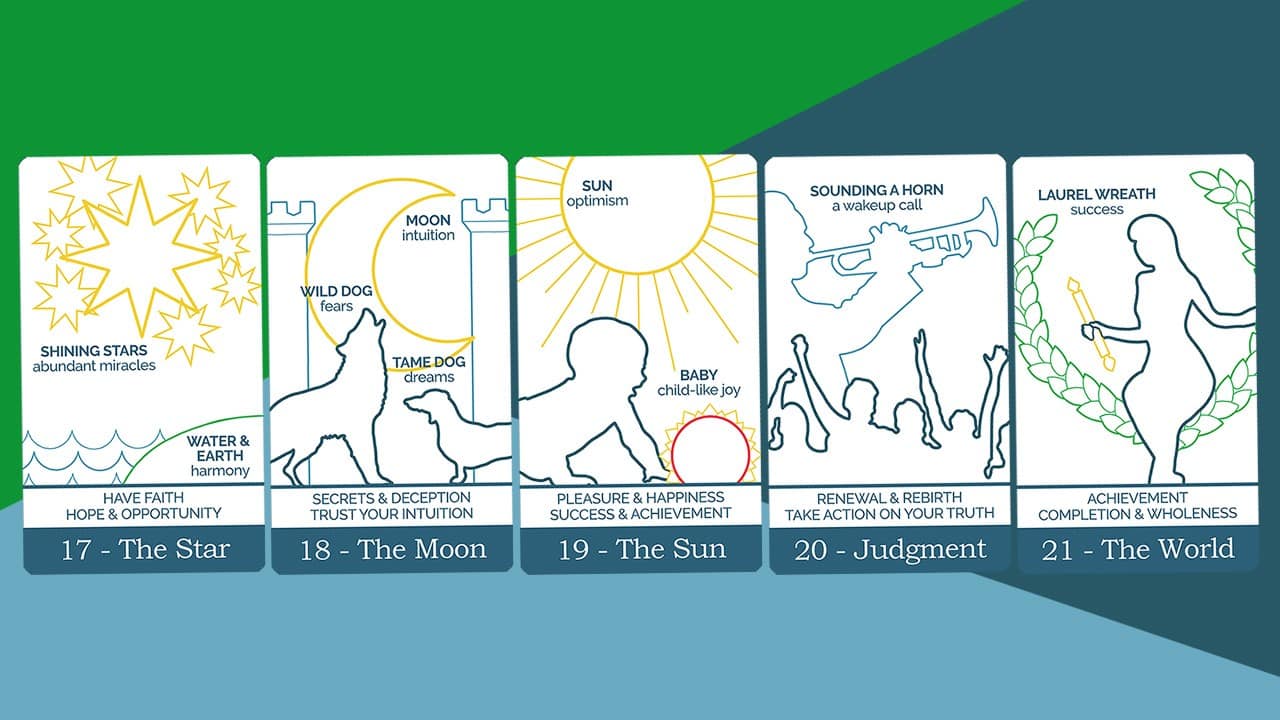 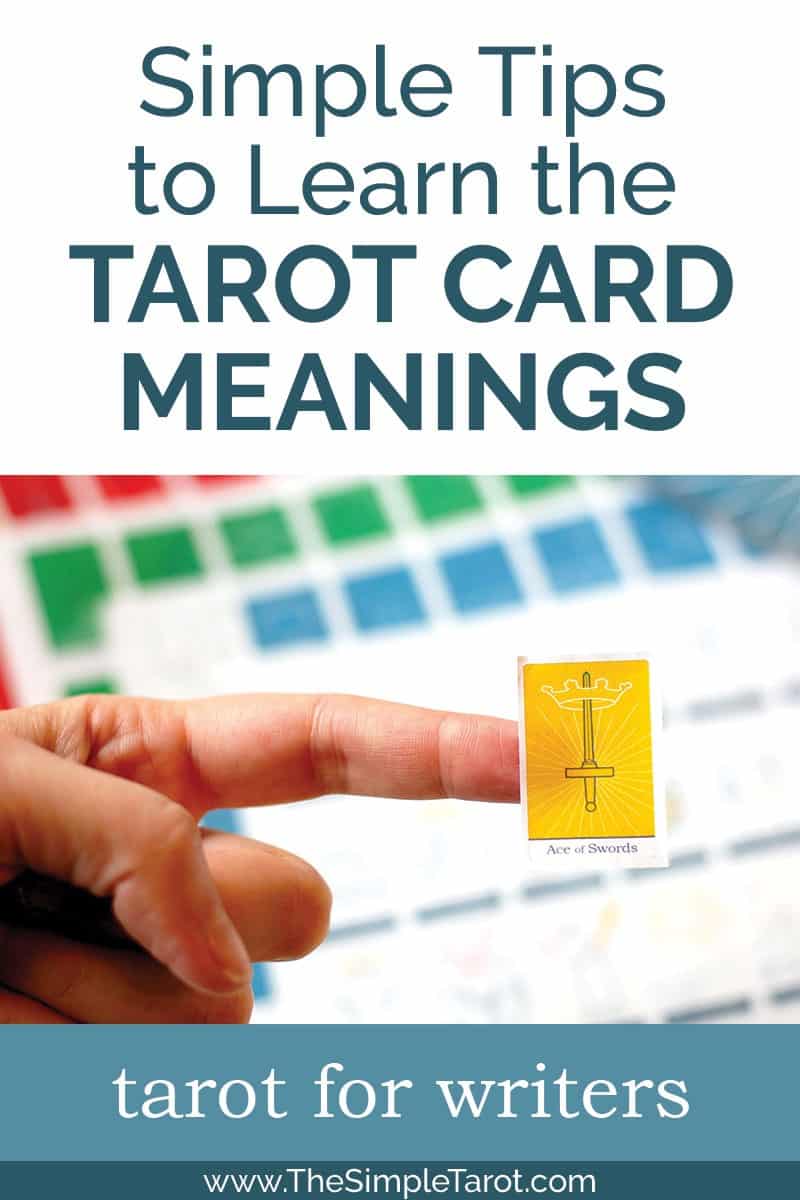 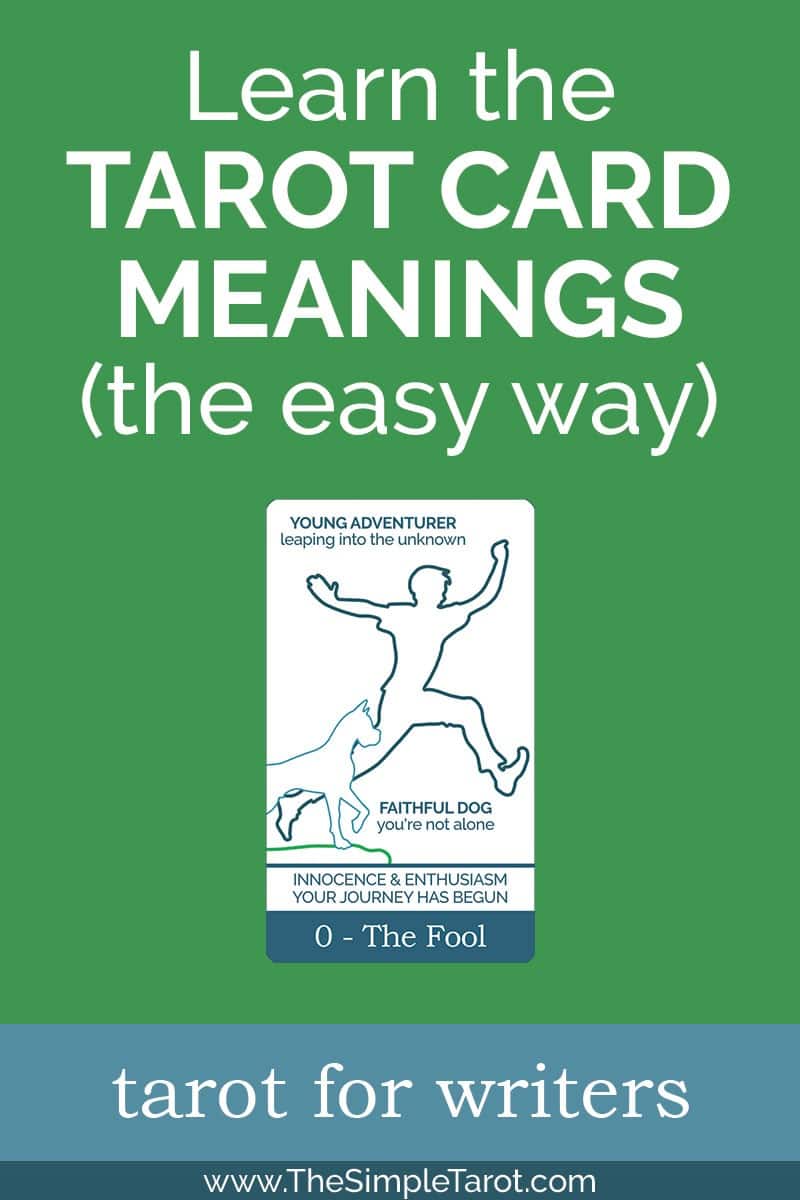 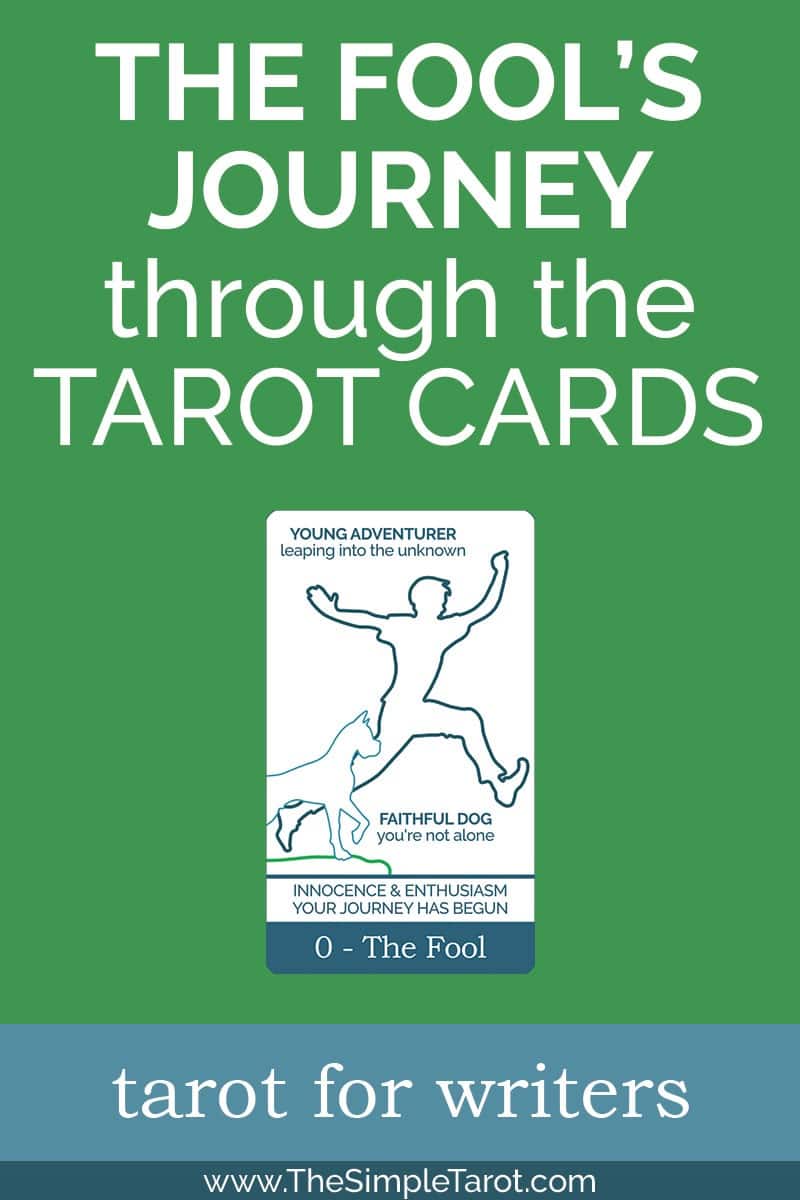 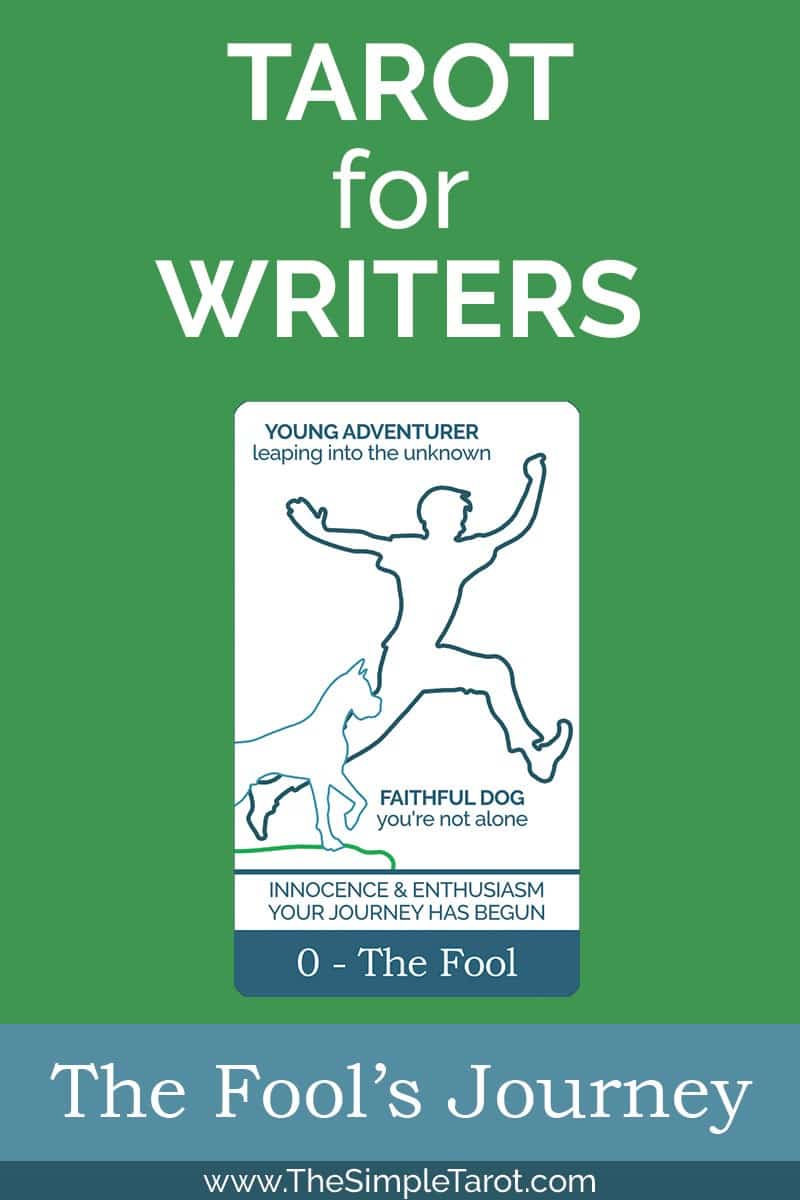